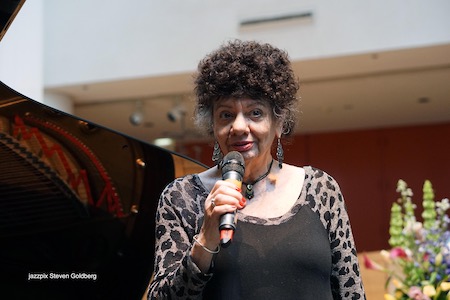 The NOW Society and the Roundhouse Community Centre

present an improvisation workshop with

Jay Clayton will also be performing on Nov 5th as part of Modulus Festival, as a featured vocalist in Ayelet Rose Gottlieb's "13 Lunar Meditations: Summoning the Witches." Find our more here.

Jay Clayton's work boldly spans the terrain between jazz and new music. Clayton’s pioneering vocal explorations placed her at the forefront of the free jazz movement and loft scene in the 1970s, where she counted among the first singers to incorporate poetry and electronics into her improvisations. She formed a long-term association with renowned minimalist composer Steve Reich.

With more that 40 recordings to her credit, Clayton has appeared alongside such formidable artists as Muhal Richard Abrams, Kirk Nurock, Stanley Cowell, Lee Konitz, and Fred Hersch, as well as fellow vocalists Jeanne Lee, Norma Winstone, Urszula Dudziak, and Bobby McFerrin. Clayton currently records for Sunnyside and her most recent album, Brooklyn 2000, met with enthusiastic critical praise. Her many accomplishments include grants from the National Endowment for the Arts, Meet the Composer, and Chamber Music America (2004). She has worked with thousands of students in the United States and across the globe.