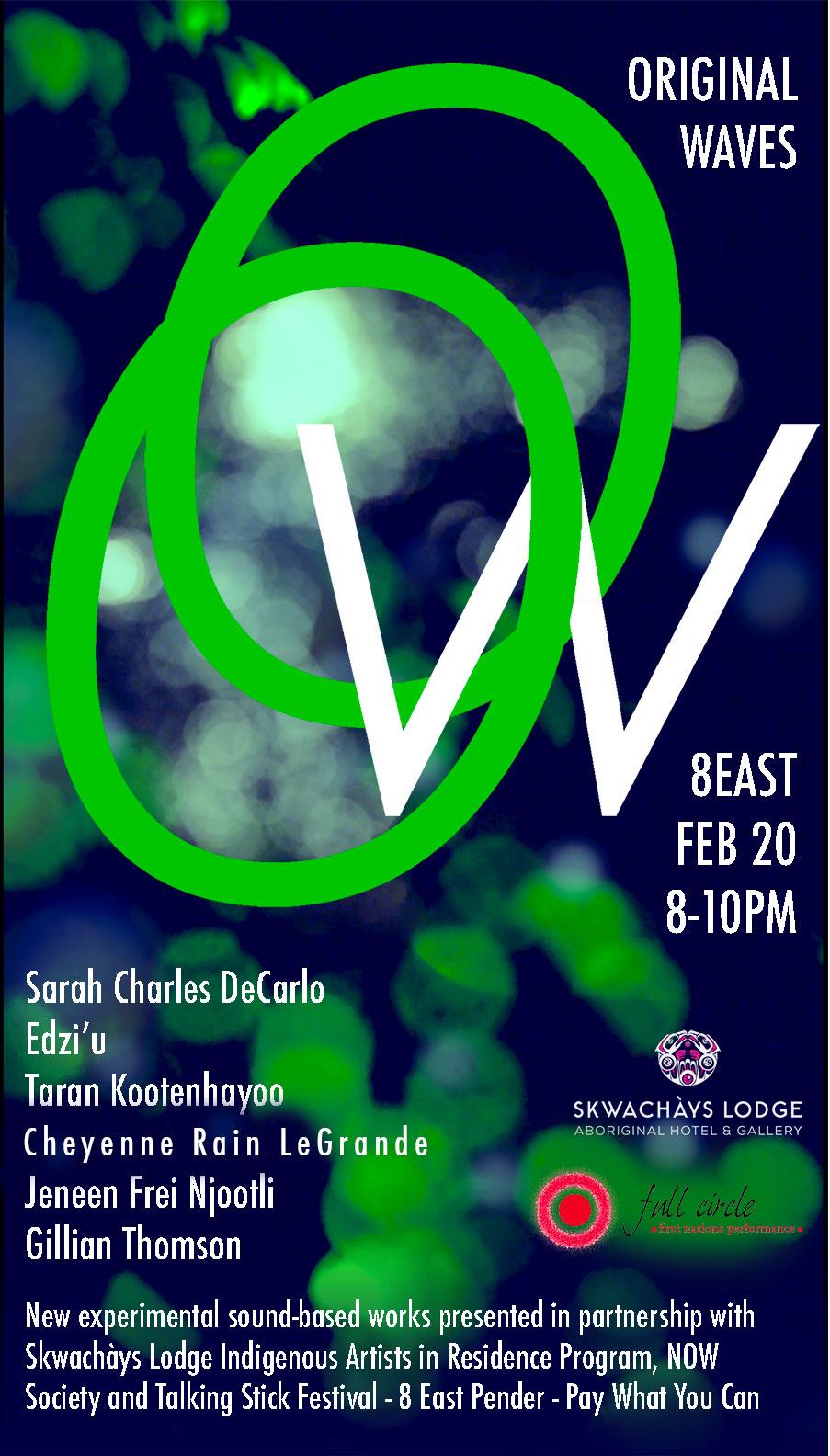 The Artists in Residence opportunity at Skwachays Lodge Aboriginal Hotel and Gallery is a unique and life-changing housing program for practicing Indigenous artists. This includes subsidized housing in clean, unfurnished bachelor suites, 24/7 access to shared artist workshop, and access to programming opportunities for personal and professional development that help artists develop their craft and move into the next phase of their careers. Maximum three-year stay is dependent on successful program participation and achievement of self-defined career goals. Emerging, mid-career, and senior artists are welcome to apply. Visit www.skwachays.com/artist-in-residence

Sarah Charles-DeCarlo (Sarah Dee) is an Anishinaabe/Italian multi-disciplinary artist and is currently an artist in residence at Skwachàys Lodge (Vancouver, BC) where she also studies cello at the BC Conservatory. Her residency and research include the exploration and study of musical improvisation and filmmaking. Sarah is a filmmaker and recently produced two short films with the National Film Board and the Ontario Federation of Indigenous Friendship Centres, one of which she also edited and scored. She is currently working with Full Circle Performing Arts Society guided by the mentorship of Margo Kane. She completed her diploma in Indigenous Studies at Trent University and has been training in film and television for over 20 years. Her film work is included in the collection of the Smithsonian Museum of the American Indian and her films have screened at Fabulous Fringe Film Festival, ReFrame Film Festival, Imaginenative, Mispon Film Festival and Optic Nerve. Sarah’s original music and songs are documented in 2 albums, BUBBLE WRAPTURE (2017) and WHISPER IN YOUR EAR (2012).

A mixed race Tahltan-Tlingit songwriter and composer, Edzi’u’s (EdziuMusic) sound has evolved into mixing electronic with acoustic writing, and sampling audio from many generations of her grandmother’s recorded stories. She’s taking her music and voice in a completely different direction, fully encompassing her life and colonial inheritance as a twenty-first century indigenous woman.

Jeneen Frei Njootli is a Vuntut Gwitchin artist with Czech and Dutch ancestry and has been a grateful guest on unceded Coast Salish Territories for 12 years. Sound, performance, fashion, collaboration and community are some of the ways that her practice takes shape. Her recent publication, which accompanies a solo exhibition by the same name, “my auntie bought all her skidoos with bead money” is available through the Contemporary Art Gallery in Vancouver.

Taran J. Kootenhayoo is a Denesųłįné & Stoney Nakoda actor, playwright and spoken-word poet who pays rent in Vancouver. Taran is a member of the Full Circle First Nations Performance Ensemble, signed on with Premiere Talent and does various work with Savage Society. You can find him skateboarding around the city, protesting and protecting the sacred, drinking way too much coffee and making memes. He’s honoured to be able to do all of this on the Musqueam, Squamish and Tsleil-waututh territories. Mahsichogh. Ish Nish

Gillian Thomson is of mixed Haida, Tsimshian and European background (Ukrainian, English and Scottish) and is a vocalist, songwriter, vocal coach and actor. Gillian fronted Sister Says, an original soulful indie pop band, as a vocalist and songwriter with her brother Robert. The band toured within BC, Ontario and internationally in Bejing 2017. Gillian sings in her R&B and pop cover band Full Spin at private events and as a hired vocalist. In June 2017 she co-curated the diverse concert Giving Voice, in partnership with Bill Reid Gallery and Christ Church Cathedral in Vancouver. During 2018 she sang with Tonye Aganaba, Ndidi Cascade, OHR Afrika Collective, Mad Riddim, her father Jamie Thomson’s band, Quantum Council and Withe and with actor and spoken word artist Taran J. Kootenhayoo. She delivered songwriting workshops in Haida Gwaii at Edge of the World Music Festival 2018 and is also a member of experimental theatre company Boca Del Lupo’s 3.7 Initiative, a member of Full Circle Training Ensemble and Urban Ink Collective.

Talking Stick Festival – As a registered non-profit Society, Full Circle: First Nations Performance's annual arts festival, now in its 18th year, began as a way to showcase and celebrate Indigenous art and performance to a wider audience. From its humble beginnings, this unique and exciting event has grown into a full 2-week Festival held annually in February at locations across Vancouver. Now attracting over 20,000 attendees each year and still growing, the festival is noted as being the premier, multi-disciplinary Indigenous arts festival in North America. With a desire to appeal to Indigenous and non-Indigenous attendees alike, Talking Stick Festival's programming focuses on the diversity of visual arts, dance, theatre, music, powwow and film in both traditional and contemporary formats. This year's #TSF2019 theme is hən̓əm̓stəmxw tə syəθ" (pronounced huh-num-stoh teh see-yahl), which translates to "Using Tradition."