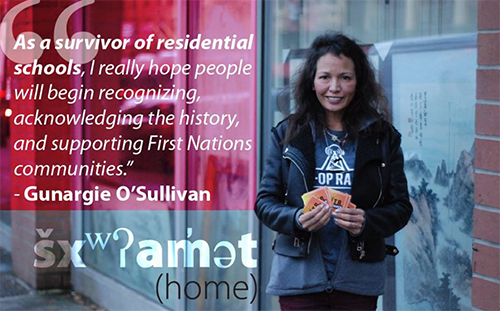 Listening NOW takes place the first Saturday of every month between 12 noon and 1pm, from November 2019 to July 2020. These events are FREE. Tea and refreshments are served. We have recently installed a four speaker surround sound system at 8EAST and we will listen to recordings with informed guides, leading us through the experience.

Documentary 1) Reconciliation Canada - This documentary shares the stories of Indian Residential School survivors and details the importance that this work continues though the work of Reconciliation Canada. It also details the path that many non-Indigenous Canadians face on their journey to discovering this part of Canadian history. By telling the story of Chief Robert Joseph, this documentary works to mend misunderstandings, and encourages building new relationships built on shared understandings.
Documentary 2) Women's Centre Reconciliation - The women of the downtown eastside of Vancouver are of the most affected by child apprehension, homelessness, and the residential schools. The group of women elders, through the Women's Centre were interviewed to give their accounting of these issues surrounding the Truth and Reconciliation Commissions and Reconciliation Canada's process, and give voice to the International Women's Day.

Gunargie has been dedicated to community and campus radio since 1989 and attributes her knowledge to her guests and her community. The Resonating Reconciliation project was originally her idea and she helped develop the proposal. Gunargie is the founder of the shows “Late night with Savages” on CFRO-FM Vancouver Co-op Radio and “Nation to Nation” on CJSF-FM and currently produces “When Spirit Whispers” and “Sne’wayulh” at CFRO-FM. She also founded the Red Jam Slam Society, which exists to initiate celebrations, events and festivals that feature Aboriginal artists and performers and encourage grassroots and inclusive strategies to honor all Aboriginal voices. The Red Jam Slam Society is also a partner organization in the Resonating Reconciliation project. Gunargie was also the Aboriginal Representative on the NCRA Board of Directors and head of the NCRA’s Native Caucus. Gunargie was on the Board of CFRO-FM and currently sits on the Boards of WMovers and Women’s Wellness and Cultural Centre for Vancouver’s Downtown Eastside. She is a member of the Tlowitsis tribe which she says “means mad, angry people ;)” Gunargie is both a direct and inter-generational survivor of Indian Residential Schools, and was fostered and then adopted by the age of seven.
8EAST is located on the unceded traditional territories of the xʷməθkwəy̓əm, Skwxwú7mesh and səlil̓wətaʔɬ Nations, in the heart of historic Chinatown at 8 East Pender street, cross street Carrall, in Vancouver.
Future Listening NOW programs:
December 7 - Ron Samworth Free Jazz, Free Improvisation: distinctions and relations
January 4 2020 -Nikki Carter Recordings of the NOW Society
February 1 - Balot Ne Gamelan Experiments
March 7 - Giorgio Magnanensi The music of Rebecca Saunders
April 4 - Tom Carter Early Vancouver Recordings
May 2 - Asian Canadian Writers' Workshop & Friends Pender Guy tapes from the Paul Yee fonds
June 6 - Cole Schmidt Artists in the 2020 Vancouver International Jazz Festival
July 4 - Lan Tung Improvisation in Cantonese Opera