The People ARE the Power.

The NOW Society proudly presents guest artist Douglas R. Ewart, multi-instrumentalist, instrument builder, composer and artist in a project that will present a new work with the NOW Orchestra, commissioned by the NOW society.

May 29 at the Orpheum Annex.

Tickets for this concert are available here 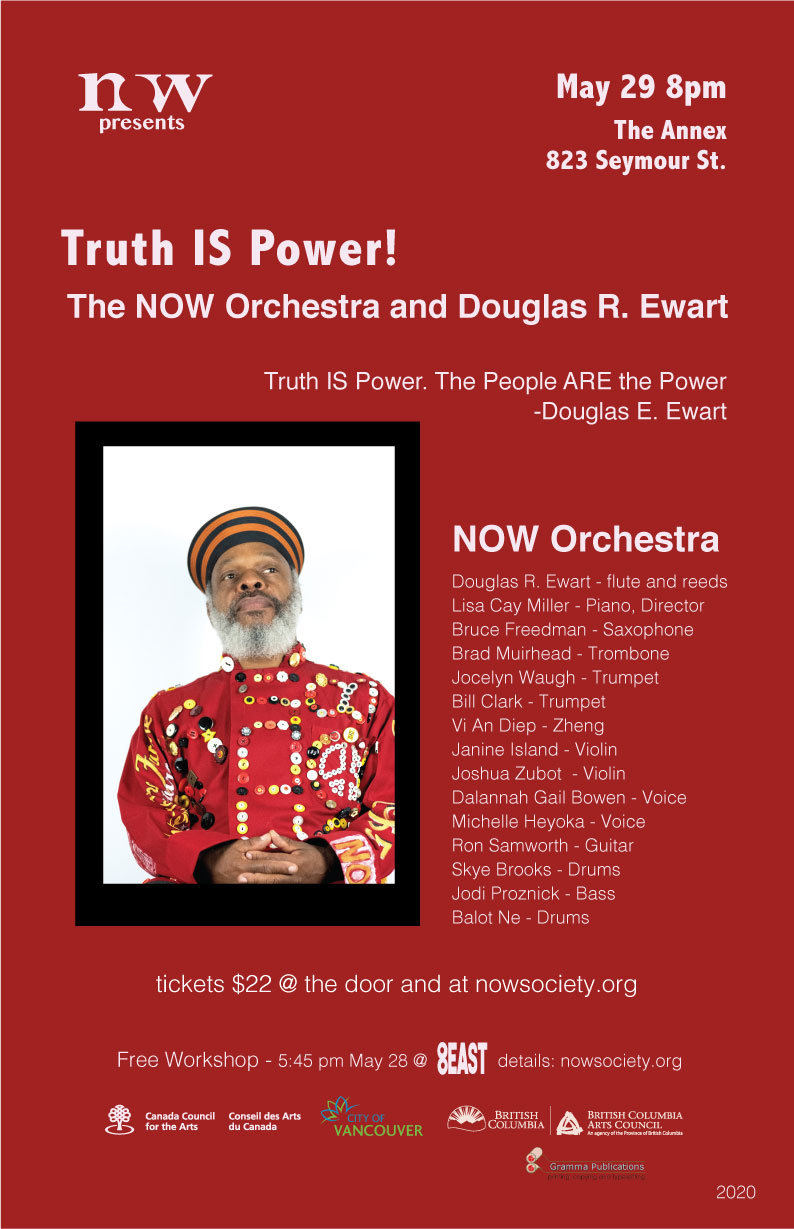 We also offer at 8EAST (by donation)

Douglas R. Ewart, Professor Emeritus at The School of the Art Institute of Chicago, was born in Kingston, Jamaica, in 1946. His life and his wide-ranging work have always been inextricably associated with Jamaican culture, history, politics, and the land itself. His father, Tom Ewart, was one of cricket’s most internationally celebrated professional umpires, eventually earning induction into the Cricket Hall of Fame. His aunt, Iris King, was a leading member of Norman Manley’s People’s National Party, and later, the first woman mayor in Jamaica.

Professor Ewart immigrated to Chicago in 1963, where he studied music theory at VanderCook College of Music, electronic music at Governors State University, and composition at the School of the Association for the Advancement of Creative Musicians. The AACM is renowned for its wide-ranging experimental approaches to music; its leading lights include Muhal Richard Abrams, Joseph Jarman, Fred Anderson, Art Ensemble of Chicago, Anthony Braxton, Lester Bowie, Kalaparusha Ara Difda, George Lewis, Malachi Maghostut Favors, Roscoe Mitchell, Amina Claudine Myers, Henry Threadgill, and many others, including Professor Ewart himself, who served as the organization's president between 1979 and 1987.

Professor Ewart’s extremely varied and highly interdisciplinary work encompasses music composition (including graphic and conceptual scores as well as conventionally notated works), painting and kinetic sound sculpture, and multi-instrumental performance on virtually the full range of saxophones, flutes, and woodwinds, including the flutes, pan-pipes, rainsticks and percussion instruments of his own design and construction for which he is known worldwide. Professor Ewart’s work as composer, instrument maker and visual artist has long reflected his understanding of the importance of sustainable and natural materials, particularly bamboo, which serves not only as primary physical materials for many of his sculptures and instruments, but also crucial conceptual elements of some of his most important recordings, such as the widely influential Bamboo Meditations At Banff (1993) and Bamboo Forest (1990). His visual art and kinetic works have has been shown at Museum of Contemporary Art Chicago, the Ojai Festival, Art Institute of Chicago, Institute for Contemporary Art (Philadelphia), Contemporary Arts Museum Houston, Chicago’s Museum of Science and Industry, and many others.

His graphic/conceptual instrumental work Red Hills (1979), an homage to his native Jamaica, is very widely performed, and his work as performing instrumentalist has been presented in the Caribbean (Jamaica, Cuba, and Haiti), Europe (France, Germany, Italy, Holland, UK), Japan, Bali, South America, Scandinavia, and Australia, as well as the United States and Puerto Rico, and recorded on numerous labels, including his own Aarawak recording company. Professor Ewart is the leader of such important musical ensembles as the Nyahbingi Drum Choir, Orbit, Quasar, StringNets, and the Clarinet Choir, and in addition to his AACM colleagues, Professor Ewart has performed with Cedric I Am Brooks, Ernest Ranglin, Cecil Taylor, James Newton, Anthony Davis, Robert Dick, Jin Hi Kim, Alvin Curran, Von Freeman, Yusef Lateef, Richard Teitelbaum, Mankwe Ndosi, Edward Kidd Jordan, Wadada Leo Smith, Steve Lacy, and others.

Professor Ewart’s highly communitarian work as a conceptual artist is best represented by Crepuscule (1993-present), a massive participation performance coordinated by his ensemble, Douglas R. Ewart and Inventions. Strongly informed by the Jamaican Jonkunnu tradition, Crepuscule is an all-day event that is collectively created by scores of musicians, dancers, visual artists, poets, capoeira, puppeteers, martial artists, activists, elders, children and more, in streets and parks in Chicago, Minneapolis, Philadelphia, Paris, France, Guelph Canada and more. Moreover, this communitarian orientation has long included educational work in underserved communities, such as his work since 1992 in Minneapolis’s ArtStart, summer interdisciplinary arts program since its inception in 1992 and his work since 1980 at Chicago’s Urban Gateways Center for Arts Education, which was documented in the 1992 British telefilm On the Edge: Improvisation in Music.

Among his many honors, Professor Ewart was personally presented with the Outstanding Artist Award by Chicago's first African American mayor, Harold Washington. He has received two Bush Artists Fellowships (1997, 2007), three McKnight Fellowships (1992, 1994 and 2001), among others, as well as the U.S.–Japan Creative Artist Fellowship (1987), a year-long residency in Yokohama where he studied Japanese techniques of instrument building. He has received grants from the National Endowment for the Arts, the Rockefeller Foundation, the Jerome Foundation, and others.

The NOW Society gratefully acknowledges that we make music on the unceded traditional territories of the xʷməθkwəy̓əm, Skwxwú7mesh and səlil̓wətaʔɬ Nations.